A blend of timeless grandeur and contemporary luxury 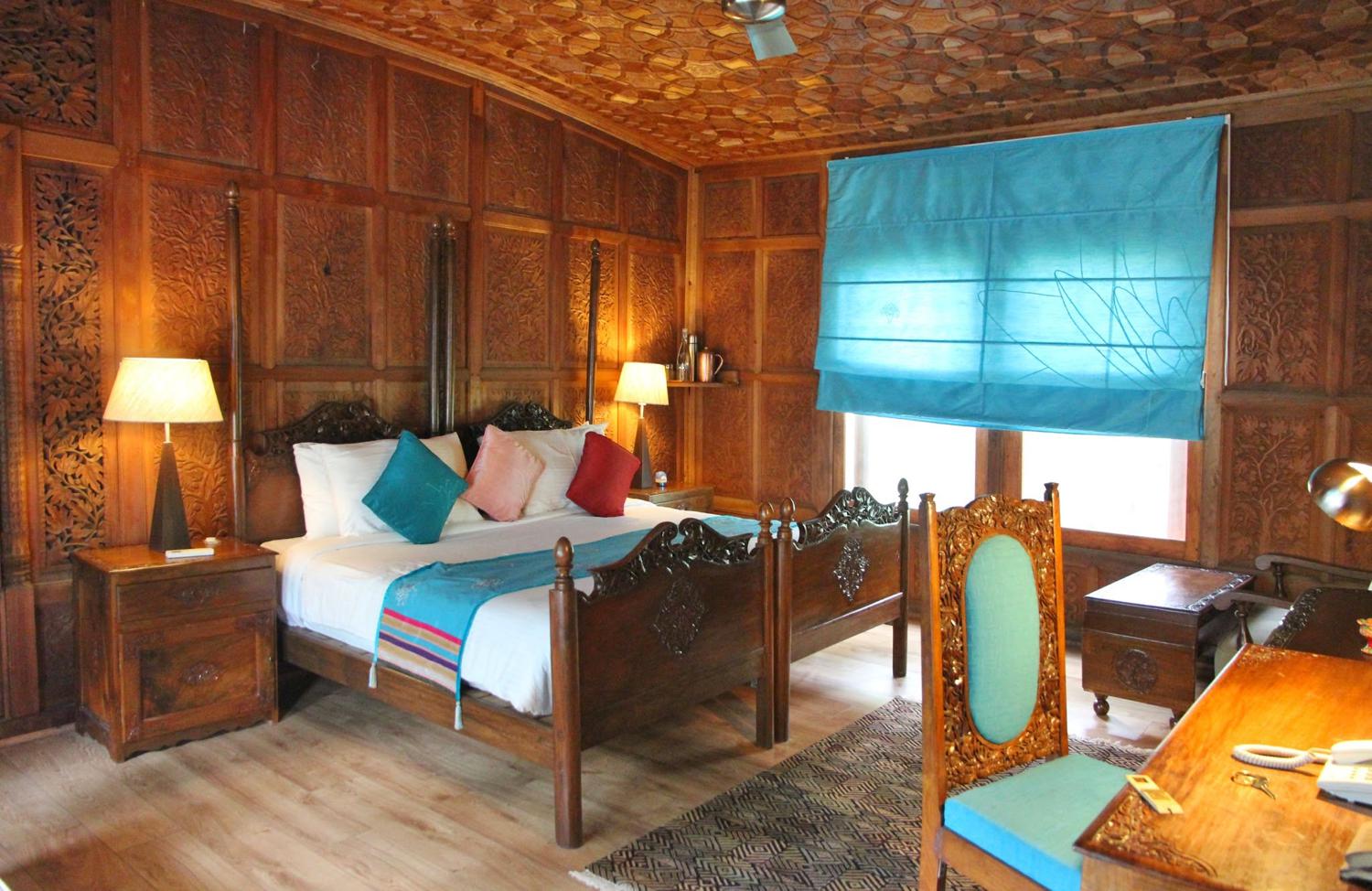 A piece of heaven

Srinagar – The verdant valley of Kashmir is a land of lakes and waterways, beautiful gardens and wooden architecture that leave you speechless. In the 19th-century, some of Srinagar’s boat-dwelling community started building larger versions of their own homes to cater to visitors. Sukoon brings this traditional concept of a residential houseboat into the modern era, while losing none of the charm of history. Surrounded by lotuses with clear views of the pristine peaks of the Himalayas, Sukoon has carved a niche of its own. Sukoon is a Sufi term for an elevated state of mind that combines peace, wisdom and contentment. The houseboat Sukoon brings these qualities for you to savour. It has been created as a haven where you can relax and revitalise. By day you can watch life go by on the lake at the same unhurried pace it has done for centuries; at night you can dine under the endless canopy of brilliant stars, lulled by the gently lapping water.

From Sukoon, an exhilarating drive takes you to the mountain paradise of Aru – a lush valley nestled deep in the Himalayas.  The drive in itself is a visual delight as you pass paddy fields; fields of saffron (in bloom in October); ruins of Avantipura temples; and then from Pahalgam (valley of shepherds) into an astonishingly green valley, along the gushing Lidder River to reach the meadows of Aru. Sojourn here for a night, at the luxurious Sukoon Deluxe Camp.

Explore the meadows further up the hillside, paying a visit to the Gujar tribes and experience their living which has remained unchanged for centuries. After a few hours of gentle hill walking on verdant slopes and concluding it with a cup of tea with the Gujars return to base, where a sumptuous five course dinner with traditional music, played by local musicians, await by a crackling campfire under the Himalayan sky.

(Best time mid May to October)

Mahadev is another name for Lord Shiva, and a peak named after the mighty God stands behind the Zabarwan hills visible from Srinagar.  Standing at an elevation of 13,013ft (3966m) Mahadev is a trekking peak requiring no previous mountaineering experience, but a good level of physical fitness.

The two-day attempt at the summit of Mahadev includes a night camp in Lidwas, which is also a summer camping ground of Gujar tribals.  The Lidwas camp offers fine views of the valley and you will have enough time to visit one of the Gujar huts; they may just offer you a cup of their salted pink tea!

Start very early next day to summit the peak; the climb to the top is precipitous, interspersed with walking on grassy slopes and scrambling up loose rocks.  The ascent to the top takes about 3 hours and the efforts are well rewarded by the superb views not only of the Kashmir valley but as far as the twin lake of Tarsar and Marsar!  After a quick photo session and drinks, descend for about 5 hours to the road-head from where it is only around 30-minutes’ drive to Sukoon and its luxuries.

After breakfast, depart for the ‘Old City Walk’ in the old district of Srinagar, only 20 minutes away.

The walk begins at Zaina Kadal (bridge) – march through the old quarters of Srinagar city into narrow streets, past structures and buildings, relics from an earlier period, trying to retain their dignity in the fast changing world so alien to them. This leads out to the grand mosque of Jami Masjid, an impressive wooden structure, notable for the more than 300 soaring pillars supporting the roof; each made of a single deodar tree trunk. Carry on to the Shah Hamadan mosque, one of the oldest mosques in Srinagar, it is noted for the papier-mâché work on its walls and ceilings.  No nails or screws were used in the construction of this all-wooden mosque.  It is on to the Zaina Kadal Market then, to take in the sights and aromas of spices and dry fruits on display; watch the coppersmiths at their craft beating sheets of copper into a souvenir that you may want to take home.

After a traditional Kashmiri lunch in a local restaurant, drive up to the Shankaracharya temple.  The car will take you to the foot of the flight of stairs, leading to the temple. The climb is worth the effort because the bird’s eye view of the valley from the temple precincts is truly breathtaking.  Take a shikara ride back to Sukoon and it delights!

Set out for a hill walk offering great views of Dal Lake and the surrounding hills.  The hike is moderate-strenuous and anyone with an average level of fitness can do it.

The trail originates from a Sufi shrine near a small village and terminates at a small cave where the Sufi saint is believed to have meditated for several years. Your guide is a local villager belonging to a rishi (a high caste Hindu) family who takes pride in his origins, and great delight in showing the scenic beauty of his birthplace. March through the small village and through wilderness soon after; the whole trek lasts about 3-4 hours and is quite steep at a few places with loose stones. The round-trip hike concludes at your guide’s house, where his family is happy to host a refreshing lunch.

Note: This tour is nearly a day long from the time you leave Sukoon after breakfast and return to home base. You could call it a day by 3pm and return to Sukoon unless you choose to spend some time browsing the shops in town.

Send us a query